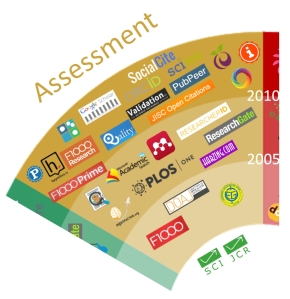 For the 2:AM Altmetrics conference on Oct 7-8, 2015 in Amsterdam, we looked at some of our preliminary survey results on tools and sites used for impact measurement. For this, we did a brief non-statistical analysis of responses up until October 1 from researchers (PhD-students, postdocs and faculty, n=3481) and librarians (n=638), comparing their answers to the following survey question:

The percentage of respondents that selected the various tools shown as preselected options in the survey question notably differed between researchers and librarians. Among researchers, traditional tools like JCR (impact factor), Web of Science and Scopus are considerably more often used  than tools for altmetrics (Altmetric, ImpactStory and PLOS article-level metrics). Librarians, however, selected Altmetric about as often as the more traditional metrics tools.

The fact that librarians much more often selected altmetrics tools like Altmetric and ImpactStory, compared to researchers,  could either reflect a greater awareness or a greater enthousiasm for these tools. 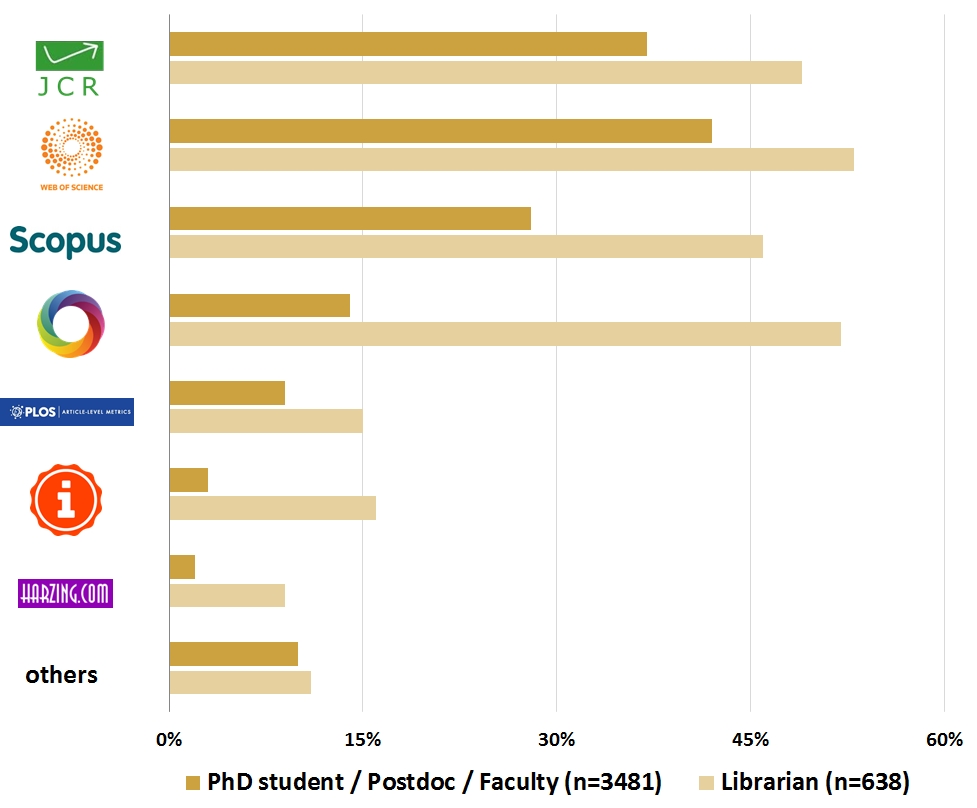 Perhaps surprisingly, these preliminary results indicate a relatively large share of altmetrics tools mentioned by researchers in the Arts & Humanities, compared to many other discplines. It should be noted that sample size for this group was comparatively small, and we did not currently do any statistical analysis. Having said that, it could be hypothesized that because Arts & Humanities scholars traditionally have limited use for citation databases like Scopus and Web of Science due to the coverage of these databases and the absence of humanities from JCR, they perhaps more readily embrace the opportunity of measuring the impact of their research output via altmetrics, in as far as this output can indeed be identified by altmetrics providers.

As yet we have no explanation for the observed difference between physical and life sciences, other than perhaps the wild guess that researchers in physical sciences still don’t consider altmetrics as seriously yet.

Share of altmetrics tools among all tools selected or mentioned by researchers, per discipline

Finally, what other tools were mentioned by participants, in addition to the 7 preselected tools shown above? Across disciplines, by far the most often mentioned ‘other’ tool was Google Scholar (which was not counted as an altmetrics tool), followed by ResearchGate (which was). Strikingly, almost nobody mentioned using alternative journal rankings.

Disclaimer: the results shown here are based on preliminary data, and are to be treated as such. No claims are made as to the statistical significance of the results, or lack of bias in the data. Our survey is running until February 2016, with many institutional partners yet to start their distribution. In addition, we are currently rolling out translations of the survey to increase participation in non-Western countries.

The poster addendum with these results, showed at the 2:AM Altmetrics conference, is also available on Figshare:
http://dx.doi.org/10.6084/m9.figshare.1572175