The number and variety of online tools and platforms for all phases of the research cycle has grown tremendously over the years. We have been charting this ‘supply side’ of the scholarly communication landscape, first in our figure of 101 innovative tools in six different phases of the research cycle (Fig 1.), and subsequently in our growing database of tools for 30 distinct research activities within these phases.

To get a visual impression of the development of tools over time, we plotted the 600 tools currently in our database against the year they were created (Fig 2., also available on Plot.ly). 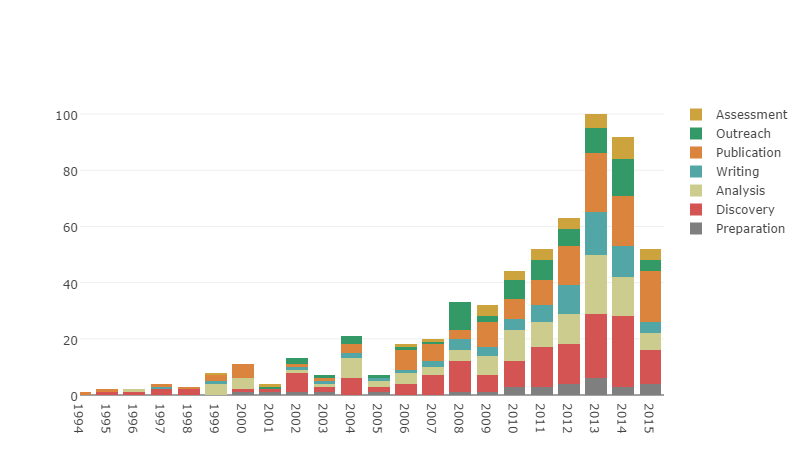 New online tool development rose sharply at the end of the 1990s and again and the end of the 2000s. The recent rise of 2013 and 2014 may be an artefact of the way we have been collecting these tools since 2013: through (social) media mentions, reviews in journals and crowdsourcing. All three sources focus on tools that have just been launched. Apart from special circumstances in higher education and research there may also be effects here of the dot.com bubble at the end of the 1990s and the web 2.0 explosion in the second half of the 2000s. The interesting peak of new outreach tools in 2008 is lacking a clear explanation. The slump in 2015 for all types of tools is due to the fact that it easily takes 6-12 months before new tools attract media attention.

A more detailed view of tool development emerges when tools are plotted separately for the different activities within research phases, against  the year  (and month, where possible) they were created (Fig 3, also available on plot.ly). As an extra layer of information, we added the current number of Twitter followers (where available) as a proxy for the interest a tool has generated.

In interpreting this plot, there are some important considerations regarding the underlying data that should be taken into account:

Taking these considerations into account, some interesting observations can be made: